Hello! Google Summer of Code is almost over and in this blog post I will summarize the final results of the project. First of all some useful facts.

This tool will hopefully help achieve standard compliance one day.

Hopefully, I will keep helping in contribution to IntervalArithmetic.jl, but now let us talk about the main beef: IntervalLinearAlgebra.jl

will set to use Rump fast multiplication algorithm (default behavior). While

will set to use the traditional matrix multiplication algorithm. With an interface to easily switch between multiplication modes, we can perform some benchmarks.

The following picture gives an intuitive idea of the speed-up obtained. A more detailed analysis coming soon to the documentation! 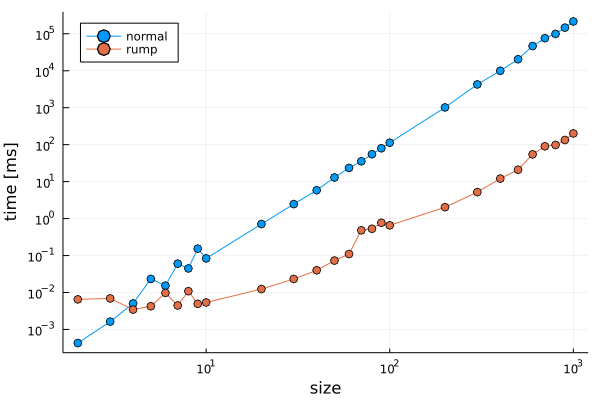 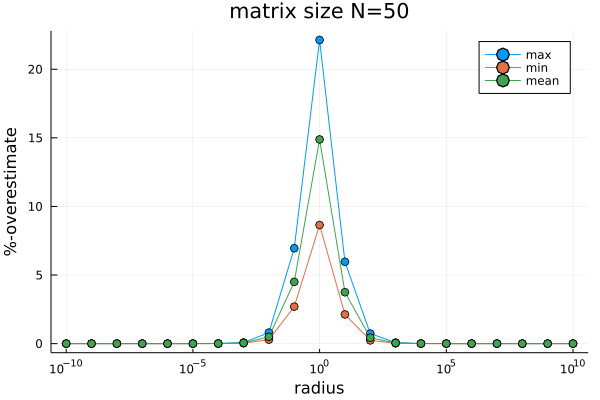 This was a stretch goal in the original proposal, but I'm glad I got something done. At the moment, I have two PRs open regarding eigenvalues.

The second one is about bounding all eigenvalues of an interval matrix. Here is a quick example

The function eigenbox takes a interval matrix and finds a complex interval that contains all \(\lambda\in\mathbb{C}\) that are eigenvalues of some \(A\in\mathbf{A}\). The following picture shows the eigenvalues of the previous matrix in the complex plane, obtained by Monte Carlo simulation, and the computed enclosure. 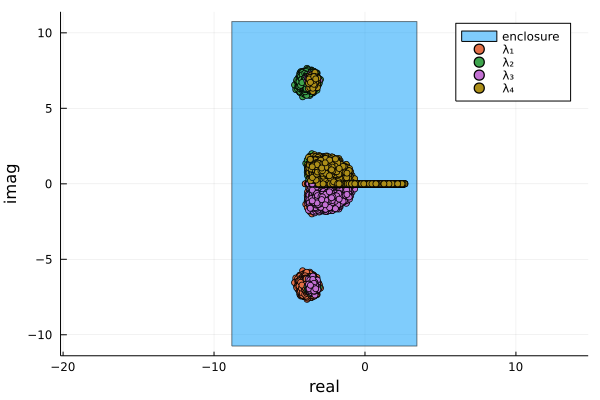 Once the above mentioned PRs about eigenvalues are merged, the first version of the package will be released! 🎉 This should happen within one week, stay tuned!

where \(p_1\in[2, 4]\) and \(p_2\in[-2, 1]\). What makes this kind of problem exciting is that just substituting the intervals in the equations and solving the normal interval linear system would lead to great overestimation, due to the so called dependency problem that interval arithmetic suffers from. For this reason, some special algorithms are needed to treat these kind of problems. Parametric interval linear arise very often in engineering applications. For example, a system with the structure above could occur when solving a resistive circuit using nodal analysis or in Finite Element Method (FEM).

Other enhancement for the package could be

the ultimate goal of the package being Linear algebra done rigorously.

Over all, Google Summer of Code has been a lot of fun, I have learned a lot and greatly developed my coding and project management skills. The best thing was to learn some "advanced"(?) tips and tricks from my mentors that otherwise I couldn't have learned by just reading the julia documentation. I am very grateful to my mentors Marcelo Forets and David Sanders for their patience and support. Moreover, special thanks to the Julia community for offering a very welcoming environment. I am looking forward to collaborating in great projects with great people!.